Our Creator is an awesome God! His creation is amazing! We are creating a day-by-day poster of creation. The creators in our room are also utterly amazing! This weekend, you will enjoy their artistry by helping them study/memorize the information on the poster. Thanks! Our Jesus’ Superstar and Child of God is nature-loving Nathan. His eagerness for learning and enjoyable sense of humor makes him an awesome student. Reading: Cluster r words and contractions with ‘s. Writing: Friendly Letter to Superstar and creating a love bucket list! Math: Word/story problems, negative numbers to forty, fact family triangles and frames and arrows procedure. Social: Black History – Ruby Bridges. Art: 3-D Hearts.

Book of the month: Curious George gets a medal 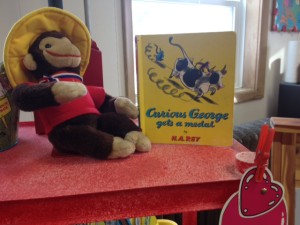 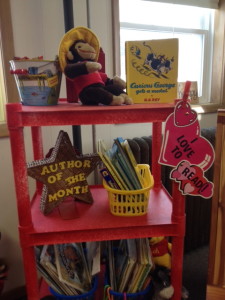 Margarete Elisabeth Waldstein was born in Hamburg on May 16, 1906. She briefly met her future husband, H. A. Rey, when she was a young girl, but then left for Hamburg to study art. They were reunited in 1935 in Rio de Janeiro, where Rey had gone to escape the political climate in Germany. Margret convinced Hans to leave the family business, and soon they were working together on a variety of projects.

Hans and Margret were married in Brazil on August 16, 1935, but they soon moved to Paris. It was there that Hans published his first children’s book, after a French publisher saw his newspaper cartoons of a giraffe and asked him to expand upon them. Raffy and the Nine Monkeys was the result, and the debuted the mischievous monkey named Curious George. After Raffy and the Nine Monkeys was published, the Reys began a book of Curious George’s own.

Before the new manuscript could be published, the Reys, both German Jews, found themselves being forced to flee the Nazi occupation. From Lisbon, they made their way to Brazil and on to New York City, where they began a whole new life as children’s book authors. Curious George was published by Houghton Mifflin in 1941. All the Curious George books, including the seven original stories by Margret and Hans, have sold over 25 million copies and are so popular that the original story has never been out of print. Margret Rey passed away in 1996, but not before establishing the Curious George Foundation in 1989, which gives money to children and animals.